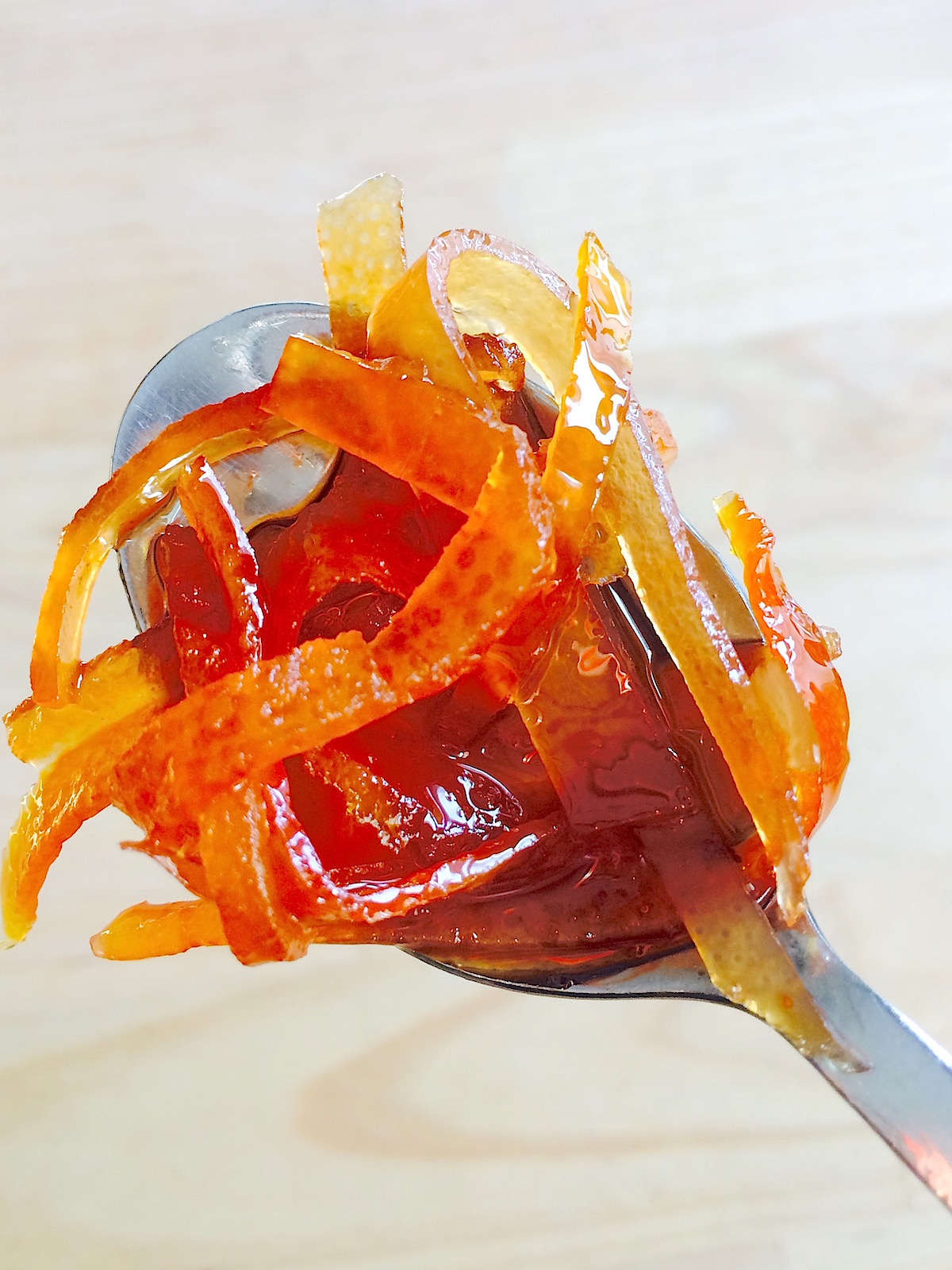 Why marmalade?  Marmalade captures the bittersweet tangy brilliance that is citrus and preserve it for later in the year – like summer. I think that one of the only redeeming parts of winter is citrus fruit. I hate the cold and I live in Minnesota, so this is for reals.  There is nothing better than marmalade on a biscuit, brushed across a BBQed chicken thigh, tossed into a stir fry or dropped into the bottom of a champaign glass topped with bubbles.  Seriously, why aren’t you making this RIGHT NOW??

This recipe is based on a version by my preserving hero, Cathy Barrow, of the blog mrswheelbarrow.com. Cathy is a well-know marmalade skeptic, but she finally cracked the code with this recipe.  What I changed is primarily in the preparation.  And my laziness.

Marmalade takes some work, I’m not going to lie. The reason I call this a lazy marmalade is that I made it in steps with lots of time in between (like days and weeks). This approach lets me squeeze in a batch of marmalade between work, school, band, circus, friends and other hectic life schedules.  Ironically, the marmalade benefits from long soaks, which extracts more pectin from the citrus.  Yeah for me!

I don’t love lots of pith in my marmalade, so I take the zest off with a vegetable peeler, then julienne it into think strips.  But you need the pith for it’s pectin, so after juicing the fruit, the pith gets chopped and mixed with water, is left to soak for at least 8 hours and is then simmered for an hour.  The liquid is strained off and added to the zest and juice before adding the sugar.

A note on citrus – I prefer in-season winter citrus that’s organic, or unsprayed local, (but I live in Minnesota, so no luck there for me).  You’re using the whole fruit here so although it’s processed, cooking will not remove chemicals from your finished product. If you’re fortunate enough to live in the southern USA, go local, or backyard.  Your marmalade will be better for it. 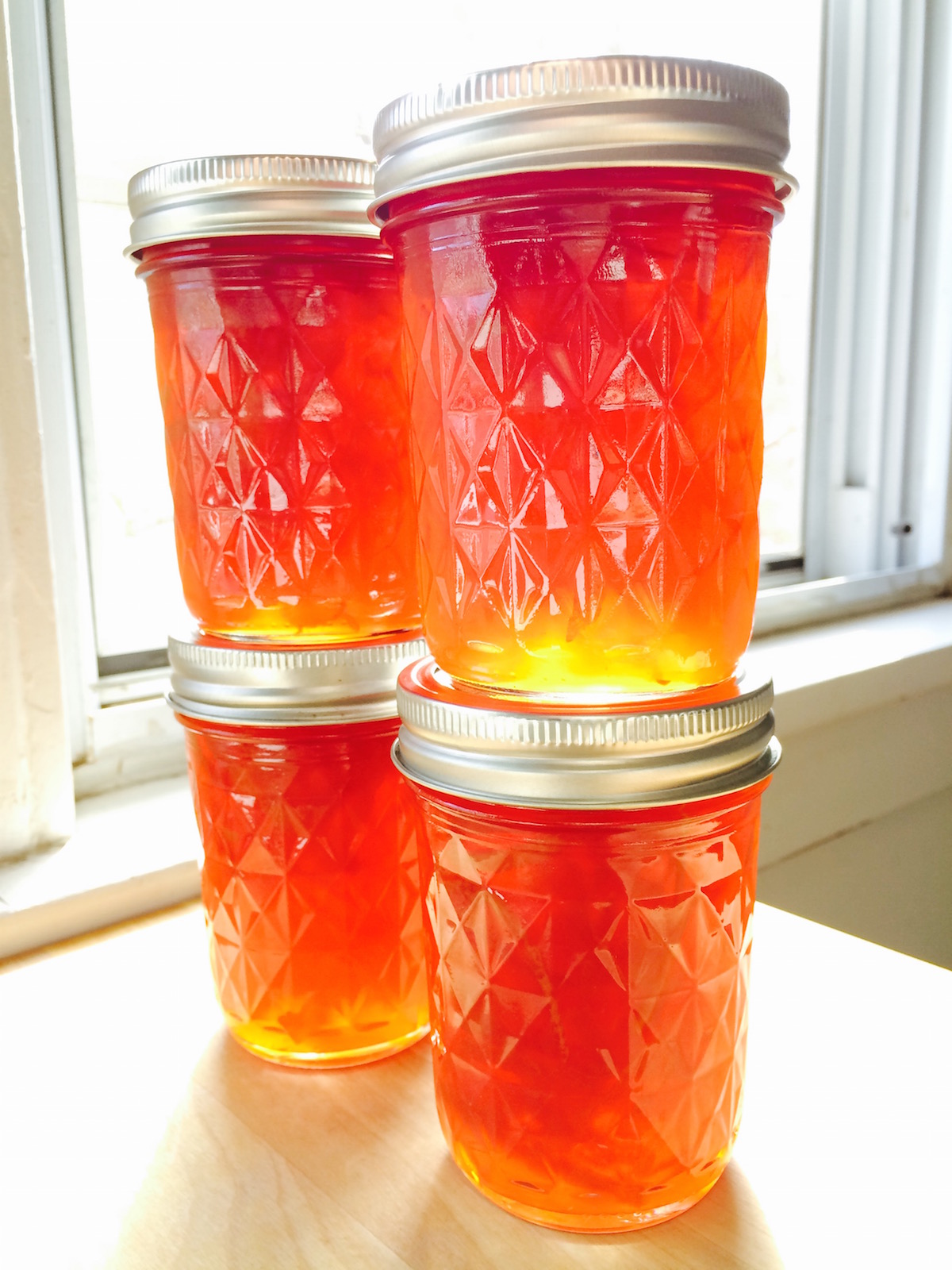 By Tammy Kimbler, adapted from recipe by Cathy Barrow

Original “Texas Marmalade” recipe can be found at mrswheelbarrow.com.

Wash citrus well in warm water. Zest citrus in wide strips using a vegetable peeler, then evenly julienne into thin shreds. Juice the zested citrus. You want at least 2 cups of juice or more. Combine zest, juice, chile peppers and 1 cup of water in a container and refrigerate.

Take the leftover juiced pith halves, roughly chop them and combine them with 7 cups of water.  Put in a container and refrigerate.

Let the two containers sit at least 8 hours, or as long as a week, until you’re ready for the next step.

In separate pans, bring each mixture to a boil, then reduce to a simmer for 6o minutes. After an hour, strain the water from the chopped piths into the zest and juice.  Discard the piths.  At this point you can continue with the last step if you have time or once again refrigerate for up to a week until you’re ready to proceed.

Bring the zest mixture to a boil.  Add sugar and lemon juice to the pot and clip on your candy thermometer. On medium to medium high heat, stirring frequently to prevent scorching, cook the marmalade until it reaches 225 degrees.  It may take up to an hour.

While the mixture cooks, sterilize 6 half pint jars in boiling water for 10 minutes and set aside.  Save the water in the pot for the final processing.

Once your marmalade reaches 225 degrees, turn the heat off and let sit for 20 minutes.

Remove the chiles. Ladle the marmalade into the sterilized jars. Wipe the rims, top with lids, and process in a boiling water bath for 10 minutes.  Remove jars and let cool complete.  Marmalade may take 24 hours to gel. 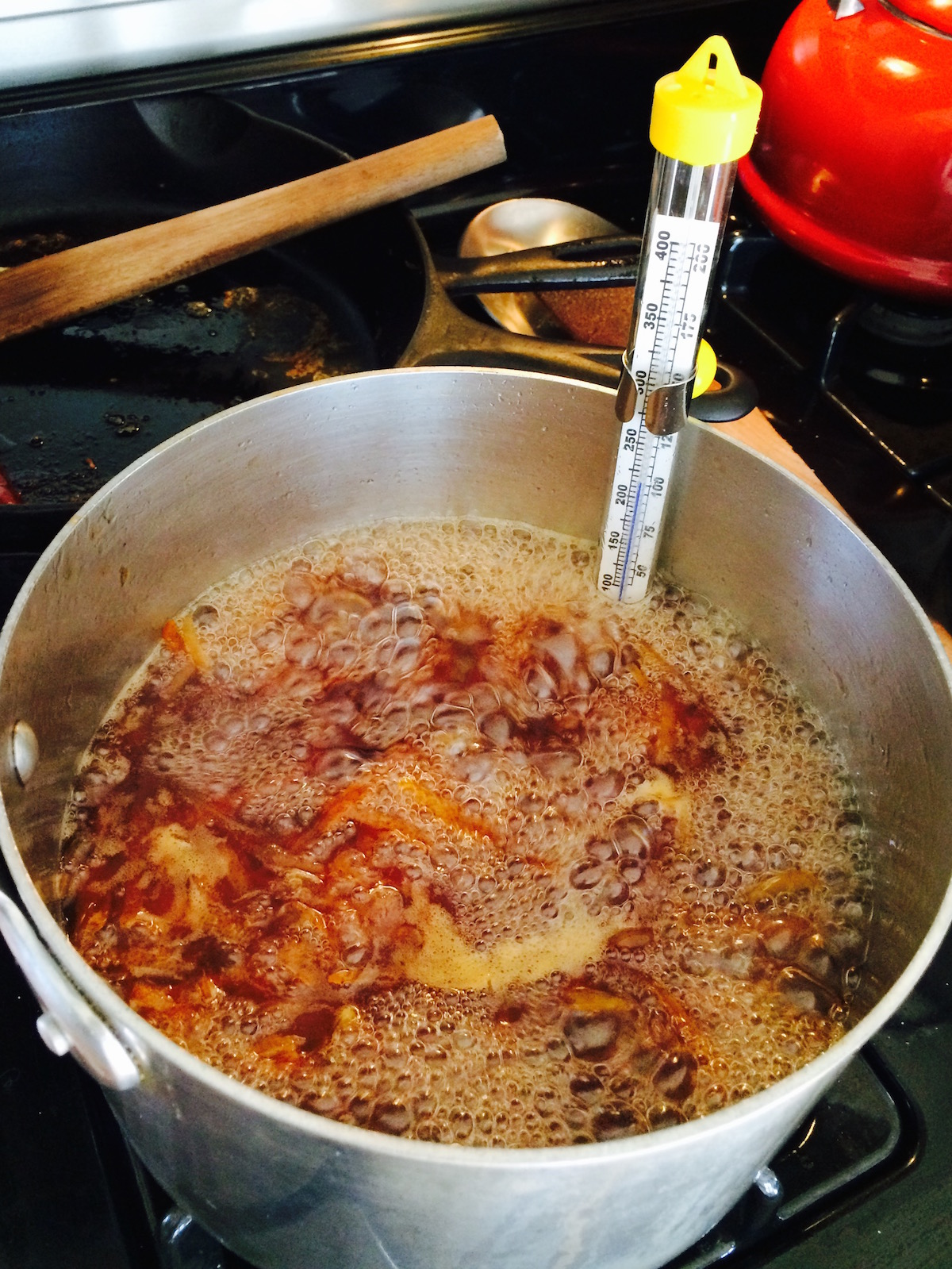