As Winter shifts ever so slowly to Spring, sugaring time is upon us.  As I drive through the hills of northern New England on a recent visit to my Mother’s house, I see spider webs woven throughout the trees, trailing over hill and dale, collecting the running sap to be boiled down into thick liquid gold.  Around every bend of those curving country roads is another placard selling gallons of the stuff. It’s maple syrup time.

Isn’t New England idillic?  Except I don’t live there.  I live in Minneapolis in an old neighborhood, in an old house with one partner, one kid, one cat and four chickens.  I don’t live in a maple forest.  Sure, there are plenty maple trees along the boulevards, in the parks and along the greenways, but those trees are owned by the city—and I have it on good authority that you are NOT allowed to tap them. What’s a girl to do?

I do have one maple tree in my backyard.  Think that’s not enough?  We’ll think again.  In one very short maple syrup season I produced 20 ounces of syrup.  In my book, that’s awesome!  Know some neighbors with more maple trees in their backyards?  Now you’re talking.

Harvesting your backyard maple sap is extremely easy.   After choosing a tree, the next thing you need is the right weather.  Ideally sap runs when day time temps are above freezing and night time temps are below freezing.  This year we had only a few random days of such weather, meaning that I only collected about 5 gallons of sap.  On a good year I’m told that the sap can run like crazy, filling your bucket daily.

After doing some research, I purchased a basic spile set with a bucket hook.  A spile is the metal tap that you put into the maple tree to reroute the sap.  I also bought a single three gallon plastic bucket and lid set. The combination is very utilitarian.

The process for tapping a maple tree is simple.  After making sure your tree is the minimum size of at least 12 inches in diameter, locate a big upper branch or large lower root and drill a 2 inch deep hole in line with it, at an easily accessible height, with a 7/16 drill bit.  Clear out the wood shavings.  With the bucket hook looped over the spile, gently tap the spile into the hole with a hammer.  Hang the bucket from the hook below the spile.  Thread the special lid through the spile and violá!  Maple tree tapped.  You’ll know your tree is ready when sap starts dripping out.  I actually drilled my backyard tree but nothing came out initially.  Then on a 45 degree day, I found sap running down the tree.  The tree was in a shady location and must have taken longer to come round.

Empty your bucket daily into a storage container and refrigerator or freeze until ready to boil down.  Since I don’t have much fridge or freezer space, I set a pot to boil in the evenings after collecting sap, reducing the liquid so it would fit in a quart jar.  By the time the sap stopped running I had many of these pre-reduced quarts in the fridge.  Strain them through a sieve lined with paper towels, then boiled them all down into syrup. You can tell when the syrup is ready because it sticks to your spoon all syrupy-like.

Refrigerate your maple syrup for up to two months or freeze it for longer storage.  There is no way mine will last that long.  Next year, I’m also tapping my neighbor’s black walnut tree, which I hear makes amazing syrup.  Your sap will eventually start to gum up, right around the time it warms up over night and the tree starts to bloom.  Remove your tap with pliers, clean your equipment and store until next year. 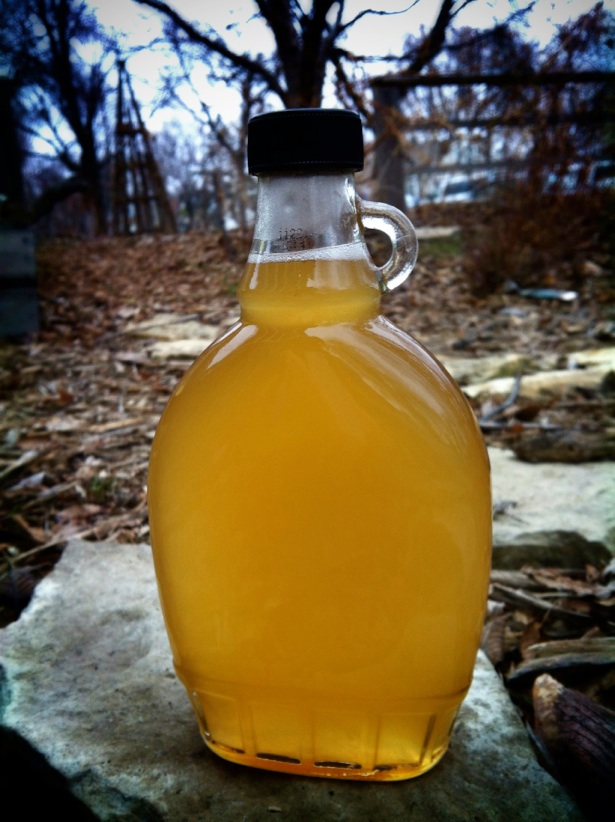 Posted in Condiments from Scratch, Gardening, Farming & Urban Agriculture
A chronicle of my adventures growing, preserving, cooking and eating from my garden and everywhere.