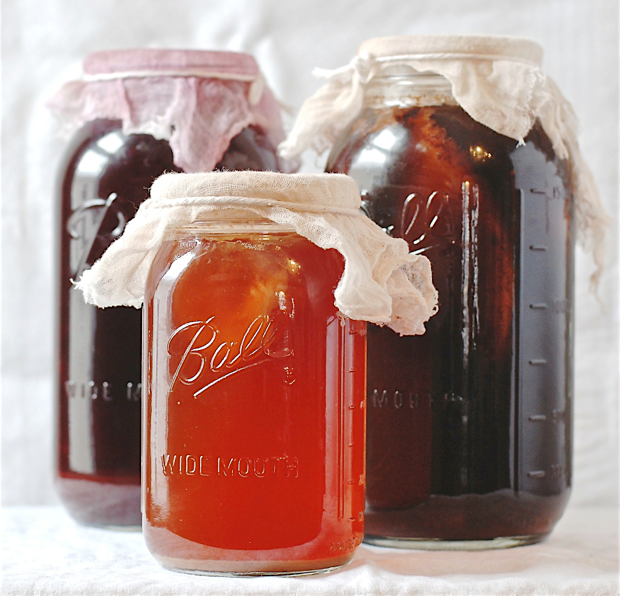 There are monsters in my cupboard.  Lots of them.  Translucent, slimy, slippery creatures that lurk in the murky depths.  I’m speaking of course, of the Mothers.  Vinegar and kombucha Mothers, that is.

Want to make your own vinegar or kombucha?  You need a Mother, also known as a Scoby.  A Mother is a symbiotic colony of bacteria and yeasts that produce vinegar, kombucha and alcohol.  While the Mothers for vinegar and kombucha are slightly different, each cultivating their own unique blend of critters, they can be built from one another and will change form depending on the medium in which they live.  In my warm dark cupboard above my stove I have three Mothers; one Mother is in wine for red vinegar, one Mother is in sweet tea for kombucha and a new experimental Mother is in beer for malt vinegar.

My own foray into Mothers started with a little wine o’clock party I threw 8 years ago.  I cleaned out my dubious wine cellar, comprised mostly of cheap reds I had collected in my college days.  If the bottle was good, we drank it.  If the bottle had gone over, we poured it in the vinegar jar.  All but one bottle was good.  (Sad face)  Thankfully we brought a few new bottles to supplement the party.  The bad bottles when into two, one gallon glass jugs.  I covered the tops with cheese cloth, set them in the corner of my basement and totally forget about them.

Several years later while cleaning out said basement, I discovered the jugs and viola!  We had vinegar  Each jar sported a thick vinegar Mother monster of it’s very own.  I moved the ladies upstairs and have been slowly using the vinegar ever since.  This spontaneous Mother-making is quite common, but it can take some time, depending on the bacteria and yeasts you have resident in your own house.

Then I read an article claiming that you could also start a kombucha Mother with a vinegar Mother.  Kombucha is like vinegar, but since it feeds on sugar and tea instead of alchohol, it produces a different type of acid and is carbonated.  Just my kind of challenge.  After 4 months of care and feeding, I now have a thriving batch of kombucha.  Now I’m on to malt vinegar, which has proved a bit tricky, but I think it’s catching on.  The Mother monsters are multiplying.

Below you’ll find a basic guide to making vinegar and kombucha, along with their Mothers.  Once the Mothers develop, future batches will go faster.  If you’re vinegar is developing to slowly, place it in a wider, more shallow container and move it to a warmer location.  These colonies need lots of oxygen exposure.

A word of warning:  If you make beer and wine at home, keep your batches segregated and do not use the same containers or tools, or your next batch of booze may become vinegar all by itself.  Not a bad thing, just not what you were expecting in that bottle of beer. 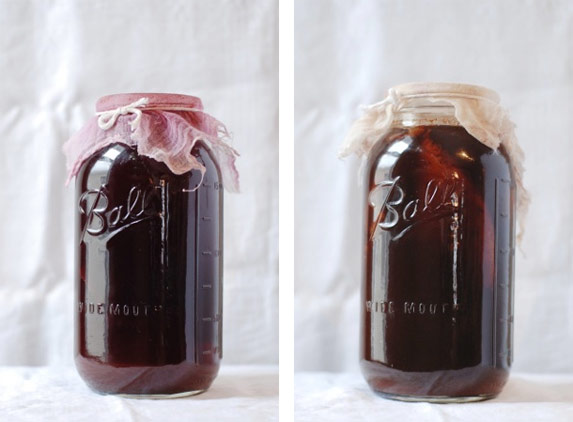 Pour the wine or beer into a glass or plastic container with a wide mouth to allow plenty of air circulation.  Stir in the raw apple cider vinegar.  Cover the container with cheese cloth and leave it out on the counter for 2-4 weeks.  In a week or two you should begin to see a thin film form on the top of the liquid.  Begin tasting your vinegar.  Once it reaches your desired level of sourness, it’s ready to use.  Store the vinegar in warm, dark place.  It may be transferred to a glass bottle, but I recommend keeping the top covered with cheese cloth.   I actually pour mine right through the cheese cloth to filter out the Mother.  When you’re ready to make a new batch, use the Mother and it should go a bit faster.  You may want to steer clear of overly hoppy beers like IPAs as they become bitter vinegar.

Kombucha from a Vinegar Mother Recipe

Because you are converting a vinegar Mother to a kombucha Mother, you need to grow it slowly in a small batch first so you don’t kill the vinegar Mother, and so that the new bacteria and yeast colony can adjust to their new food source.

Bring the water to a boil.  Remove from heat, add the sugar and tea, and let brew off the heat for 10 minutes.  Strain tea in to a wide, shallow glass container and let cool to room temp.  Add the vinegar and vinegar Mother.  Cover the container with cheese cloth and store in a warm spot.  The new kombuch Mother skin should start to form in about a week.  After a couple weeks the Mother should have thickened considerably (1/4 inch), and the kombucha should taste sour.  Now you can make the next larger batch of kombucha and grow a Mother that will sustain multiple batches.

Repeat the kombucha recipe, but this time add the entire starter batch of your first kombucha with it’s Mothers (there should be two now, the original vinegar and new kombucha). Cover the container with cheese cloth and store in a warm spot.  When the kombucha tastes sour, strain the kombucha, reserving the Mothers and at least 1 cup of kombucha for your next batch. Double the above recipe, add the 1 cup mature kombucha and a Mother for a quart batch.  Your kombucha Mothers will begin multiplying.  Keep them together, or start multiple batches.  Or give them to friends!

The strained kombucha can now be consumed as is, or can be poured into a 750ml screw top soda bottle or bail top bottle to be carbonated.  To carbonate the kombucha, add 1 tsp of sugar to the bottle before adding the kombucha.  Seal and allow to sit 1-2 weeks at room temp.  Chill before consuming. 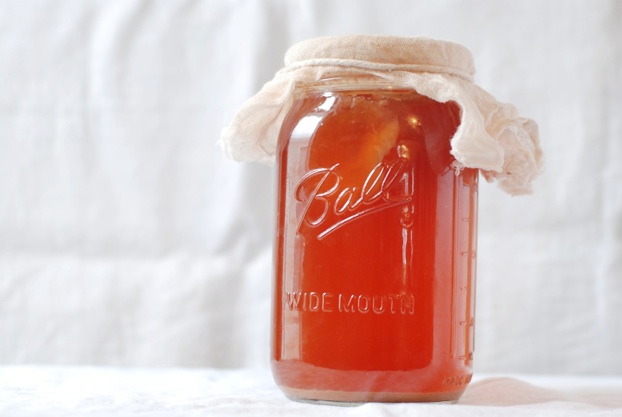