On my recent trip to New Orleans, I was on a search for Creole Cream Cheese.  I’d read about the cheese in my copy of Home Cheese Making by Ricki Carroll.  Surprisingly, the cheese proved incredibly hard to find. I rode my bike all over the city looking in shops, at the Crescent City Farmer’s Market (great cheese, just no Creole Cream Cheese) and supermarkets, finally finding one brand in a high-end store in the Garden District.  It was made by Mauthe Farms in nearby Mississippi. We later discovered it’s also made by a local supermarket named Dorignacs.  The flavor and texture is like a cross between ricotta and farmers cheese, with the tang of buttermilk.  While in New Orleans we enjoyed it for breakfast spread on toast topped with fruit on the porch of our rented Shotgun house.

According to the Slow Food “Ark of Taste,” an international catalog of heritage foods, this soft cheese was created in the 1800s by the original French settlers to New Orleans.  Often made at home or by local dairies, the cheese began to disappear in the 1900s as state dairy regulation increased.  The last factory in New Orleans shutdown in 1986.  Thanks to area chefs, home cooks, food preservationists and groups like Slow Food and the Southern Foodways Alliance, Mauthe Farm and Dorgnacs, the cheese is making a comeback.

Traditionally made from raw milk after it is skimmed of cream, then left to “clabber” or form curds, the modern version involves adding buttermilk as the culture to pasteurized milk, along with a little rennet.  After the whey is drained off, the soft cheese is topped with cream before eating.  Creole cream cheese was often eaten for breakfast with fruit or sugar, or on toasted bread.

In classic slow-food tradition, this cheese is incredibly simple to make at home, although it does need to sit for 48 hours on the counter.  My partner Christopher has requested that it be added to our regular homemade dairy products, which include yogurt, kiefer and buttermilk.  Really people, I need a cow!  Someone hook me up.

Rennet, chèvre and basket molds, and Home Cheese Making by Ricki Carroll can all be found at New England Cheesemaking Supply Company website, as well as Hoeggers Supply Co.  Rennet can also be found at many natural food stores. 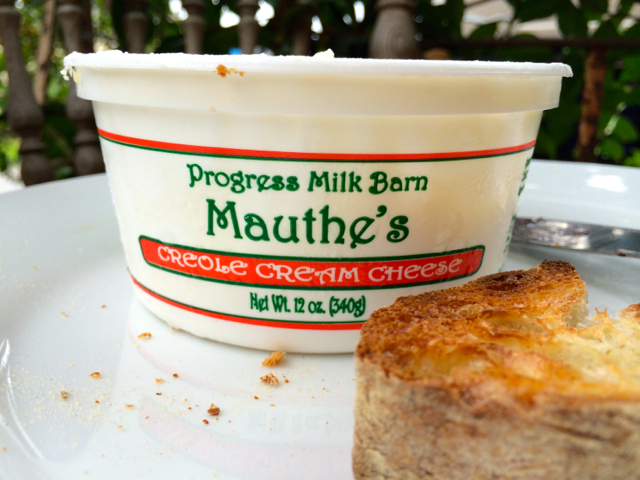 By Adapted from "Home Cheese Making" by Ricki Carroll

Bring a gallon of milk in a non-reactive container to 80 degrees by setting it in a sink full of warm water.  Once at temp, gently stir in buttermilk and rennet.  Rennet is available online or in health food stores.  Set the milk on the counter top at room temperature and cover for 24 hours, undisturbed.

The next day you will find a solid mass of a single cheese curd.  Place clean cheese molds on a wire rack set over a cookie sheet.  Line cheese molds with cheese cloth.  Gently spoon curd into cheese molds.  Cover them with a clean cloth or plastic wrap and allow to drain on the counter for another 24 hours.

At this point the cheeses can be unfolded into a sealed container and refrigerated.  If you wish to retain the cheese mold shape, refrigerate them before unfolding.  This soft, spreadable cheese should last a few weeks.  Eat as you would cottage cheese, softened chèvre or ricotta.  It’s great on toast, with fresh fruit and I hear it makes a great cheese cake. 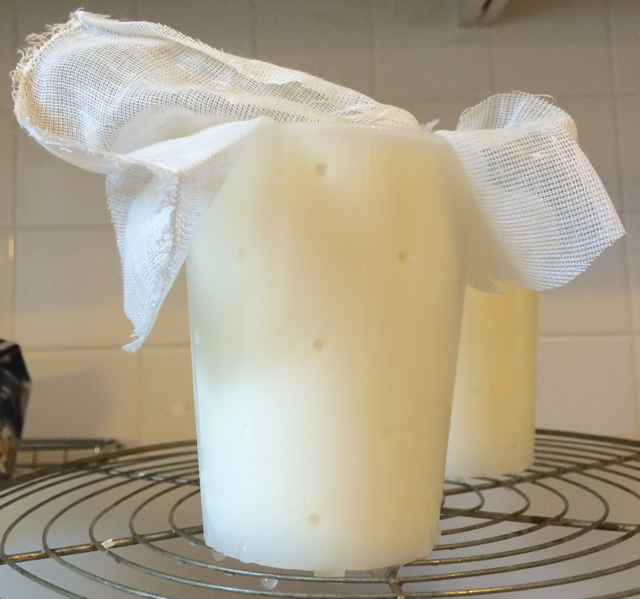