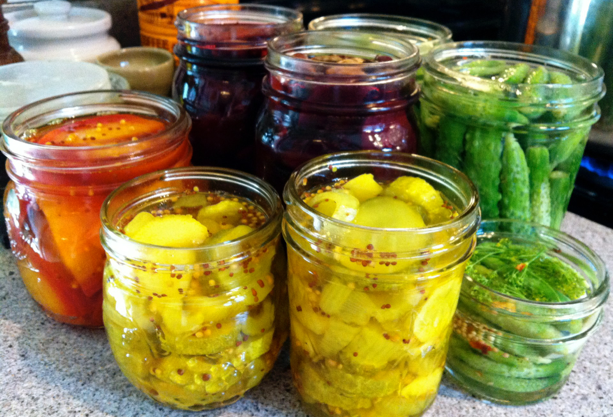 I love pickles.  Period.  I make oodles of them during the summer and eat them all year long.  I also give them as gifts for Christmas, bring them out for parties and holidays.  My main stay is straight up dill pickles.  The recipe is from my mother, Judy, who use to make them in these awesome half gallon mason jars.  But she wouldn’t let us open them until Thanksgiving because they wouldn’t be spicy enough yet.  Bread and butter pickles are my second favorite.  I use the recipe in Better Homes & Gardens’ checkered red cookbook, also available on their site. After that, I’m up for anything.  I make cornichons, pickled beets, mustard pickles, pickled peppers, chow chow, relish.  The list is pretty endless.  It depends on what is ready in the garden or farmers market and what fun flavor combo I find or dream up.

I had cucumbers and beets in the fridge from the garden, collected over the week so I’d have enough.  The pretty cucumbers (finger sized and smaller) went into pint jars for dill pickles.  I don’t care for big dills, so I used one inch circumference cucumbers for a couple half pints of bread and butter pickles.  I roasted all the beets in the oven and peeled them.  The red beets I cut in chunks and made pickled spiced beets with my homemade red wine vinegar.  The golden beets I sliced and pickled with the bread and butter brine. 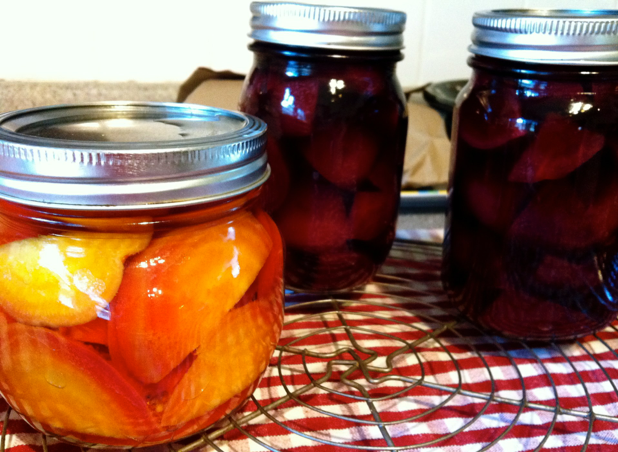 By By Judy Neilson

Fill a pot large enough to submerge two pint jars with water and bring to a boil. Pack 2 sterilized pint jars with 2 heads dill, 1/2 tsp each yellow & brown mustard seeds, 1/2 tsp red pepper flakes, one clove garlic and cucumbers as tightly as possible. Bring vinegar, water and salt to a boil. Fill pint jars within 1/2 inch of the top. Wipe rims and seal with hot lids. Process in boiling water for 10 minutes.

By By Tammy Kimbler

Pack two sterilized pint jars with cubed beets. Put remaining ingredients in a pan and bring to a boil. Pour over beets, wipe rims and seal with hot lids. Process in boiling water for 10 minutes.