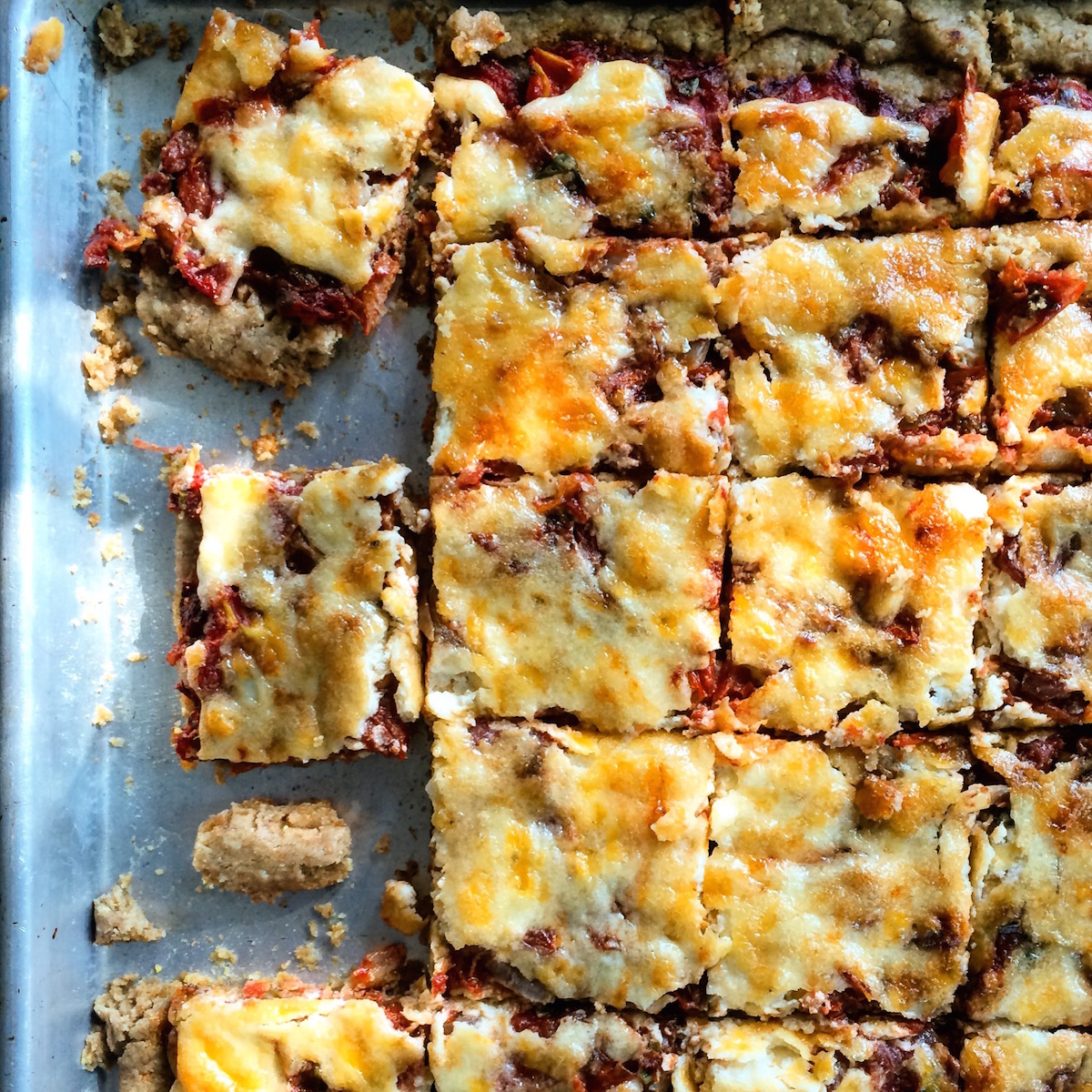 My good friend recently threw an end-of-summer hurrah, complete with a giant slip-and-slide, bonfire and an endless spread of picnic eats and drinks.  No one at the party wished to cook, what with the slip-and-slide and all, so easy finger food was the order of the day.  Since my kitchen countertops are overflowing with tomatoes, I made a half sheet pan of Southern Tomato Pie, cut in to squares, for the tired sliders to snack on between flinging themselves down the hill.

This pie takes tomato flavor to eleven.  We often associate this type of preparation with “Italian” or “Pizza,” but this is anything but.  It’s tomatoes for tomatoes sake, with only a dash of herbs, mostly just salt, pepper, cheese, mayo (yes, don’t skip it!).  Also, I’ve added a short flaky lard cornmeal crust, which to my mind makes this both more Southern and more delicious than might be legal.

I’d be remise in not mentioning that this recipe is heavily inspired by chef Vivian Howard of  Chef & the Farmer in Kinston, North Carolina.  I saw her TV show, A Chef’s Life, on PBS and was so thrilled to see tomatoes treated with such reverence that I had to try her recipe.  I’ve retooled it a bit, particularly with the cheeses and lard crust, but please try Vivian’s tomato pie recipe, as well as her other fantastic modern takes on southern recipes. 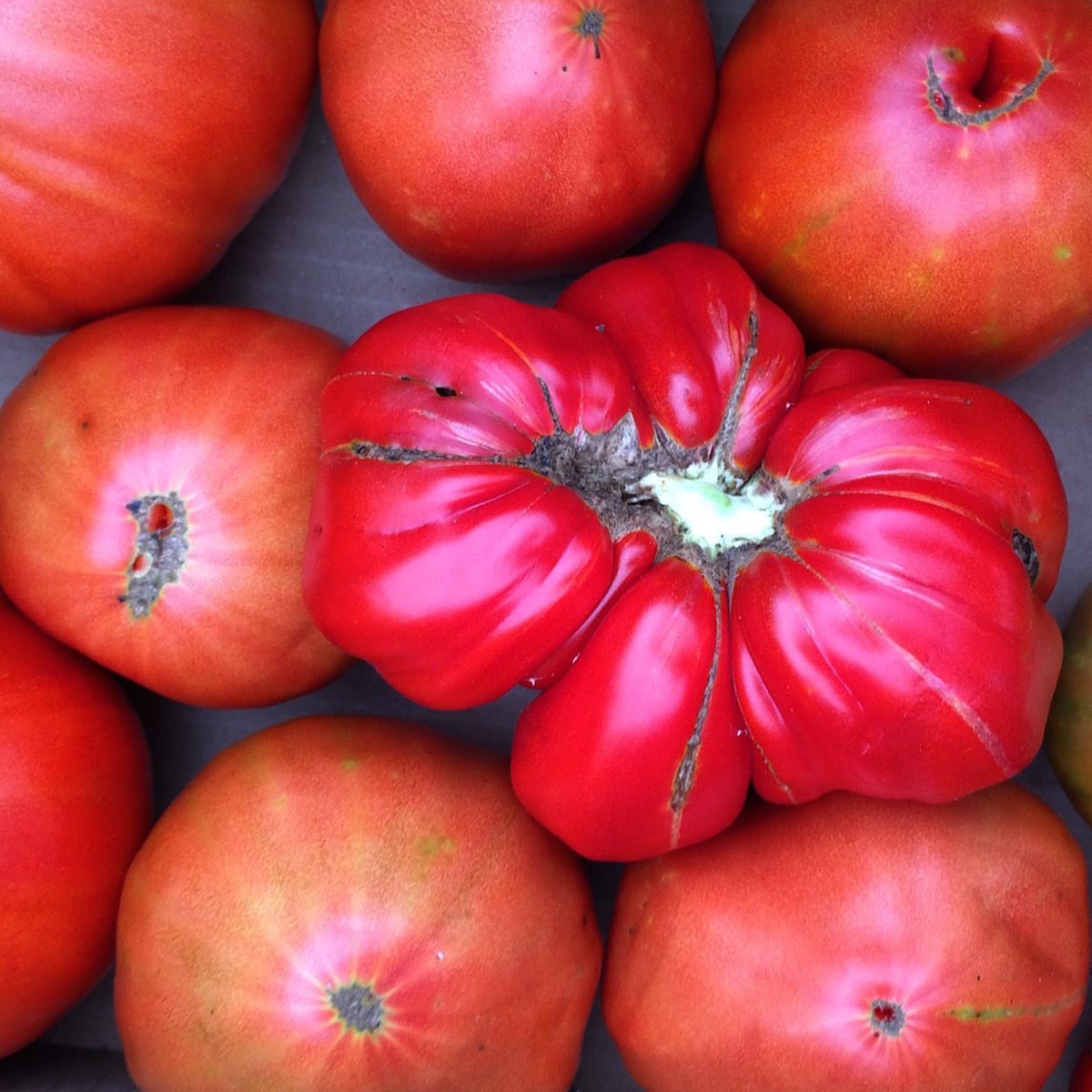 By Tammy Kimbler, Adapted from Vivian Howard of Chef & the Farmer

Start with the pie crust-I use my cornmeal crust or use your favorite double pie crust.  I like to make this in a half sheet pan, but it will also work well in two 9″ flat tart pans.  Roll the crust out, poke it all over with a fork and blind bake it at 375 degrees in the middle rack of the oven for 20 minutes.  Set aside to cool.  This is great to make the day before.

Prep the tomatoes.  Seed and dice the beefsteak tomatoes and place them in a colander to drain for at least an hour, or overnight in the fridge. Catch the juice – it’s excellent to drink fresh.  Same goes for the canned tomatoes.

Thinly slice the onions and mince the garlic.  Chopped the fresh thyme.  Toss the tomatoes, onions, garlic and thyme in a generous glug of olive oil and then spread them out on two sheet pans.  Don’t over crowd them or they won’t roast, they will steam.  Roast in the oven at 375 degrees for 45-60 minutes on the upper two racks of the oven, swapping the pans half way through, until the veggies are dry and lightly browned.  Leave the oven on if baking the pie next.

Combine cheeses and mayo, add salt and tabasco to taste.  I like a couple big dashes of tabasco as it lifts the flavor, but make it as spicy as you like or omit.  Set aside.

Combine fresh drained tomatoes with the roasted tomatoes, onions and garlic, and chopped parsley. Add salt, pepper and sugar.  This is a highly seasoned pie, as it’s typically served at room temp or chilled, which requires more seasonings.  Spread mixture in an even layer across the bottom of your pie crust.  Dollop the cheese topping on the pie carefully spreading it out, trying not to mix it with the tomatoes below.

Bake the pie at 375 degrees on the top rack of the oven for 30+ minutes until the top is lightly browned.  Cool to room temp before serving, or chill completely.  Slice into squares.