Much Ado About Mulberries 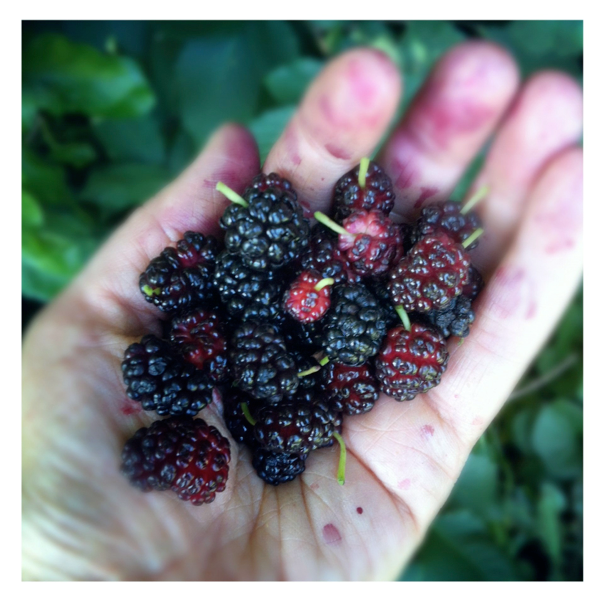 Mulberries have become part of the urban foraging scene, or gleaning as some folks call it.  I’ve never understood how mulberries earned their bad rap.  Mulberries are classified as “trash” trees that make a mess and have no good purpose.  But I’ve always liked them.  European settlers brought white and black mulberries to the states in colonial times as part of silkworm culture (silkworms live off the trees).  Red mulberries are native to the United States and the three varieties quickly cross bred and spread.

In the valley where I grew up there was an old ranch that had a huge wild mulberry tree near their orchard.  We use to pick them in late spring, covering our hands and faces in purple.  In college my Portuguese neighbor lady had a beautiful weeping mulberry with finger-long berries that I use to snag on my way to the bus stop.  When I moved to Minneapolis I was surprised by how prevalent wild mulberries were.  They line bike paths, hedge groves, parkways and streams, poking out of untended corners of gardens and garages.

Next to Dowling Community Garden where I have a plot, there is a huge grove of trees surrounded by mulberries, both red, black and white varieties.  Mulberries are tricky to pick because when they are ripe, they instantly fall from the branch when you touch them or the wind blows.  A lot of them hit the ground.  Two of us managed to pick four quarts of mixed berries in a few hours.  I froze most of them, then used one quart for dessert.  The berries are very sweet and don’t have much acid.  For a quick treat we made mulberry parfaits with yogurt, which adds a nice tart note, plus a little stove-top granola for crunch. 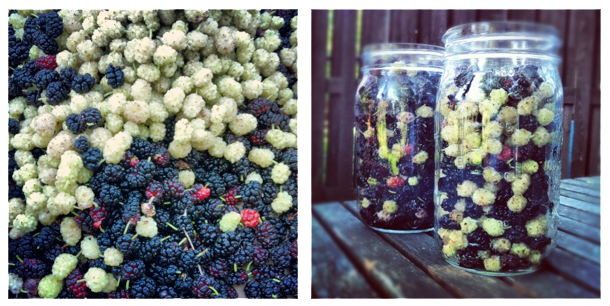 Toast the rolled oats and almonds in the sunflower oil in a pan. When lightly brown, remove from heat and drizzle with honey, stirring to coat. Set aside to cool slightly. In tall glass soda glasses, layer in a spoon full of yogurt, berries and almond mixture. Make at least 2 layers of each. Top with an additional dollop of yogurt and serve. Make 3 to 4 servings, depending on glass size. 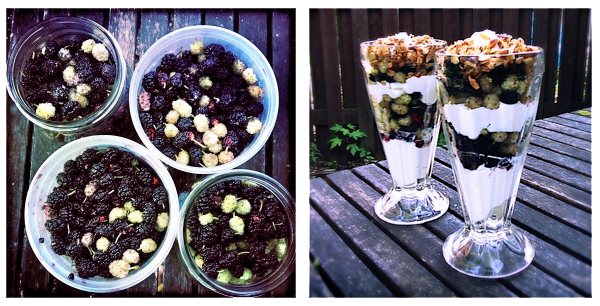